Internet censorship is growing across the world. India is no exception to it, and there have been several rounds of websites, apps getting blocked without any proper intimation. The government doesn’t keep a public record of the thousands of online sites and apps blocked by the concerned authority.

Oftentimes the ISPs are discreetly instructed to ban certain websites, apps without any prior notice. In the past year, Reddit NSFW subs have been the victims of the banhammer, where several subs were blocked as per the legal request from the company. 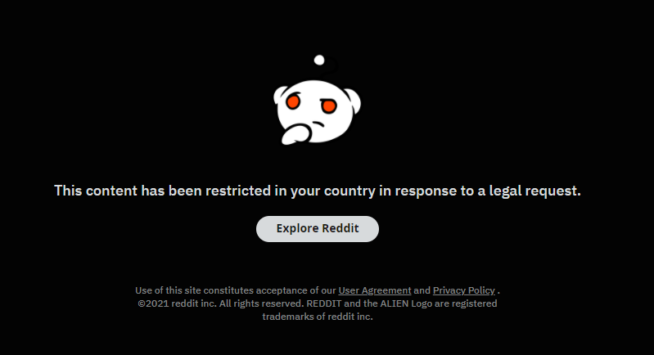 The state’s most recent crackdown on PUBG, TikTok, and other 200 apps doesn’t instill confidence. You could get a great VPN to continue using the blocked and censored apps, websites, and Reddit subs.

VPNs for India – At a Glance 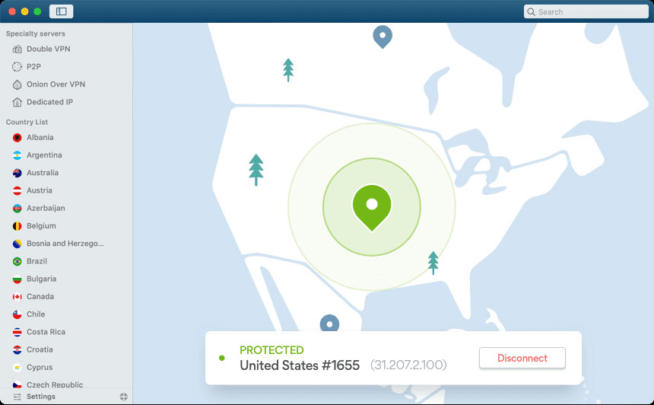 Several Internet influencers out there are endorsing NordVPN for all the right reasons. The year-long deals and offers on its already cheap plans make it worth your while. To stay ahead, the VPN service has designed and launched its very own VPN protocol, NordLynx, built on inspiration from WireGuard. Along with that, NordVPN supports OpenVPN and IKEv2 protocols.

There are no restrictions on streaming Netflix or downloading torrents on any of the servers. However, there are a limited number of servers for torrenting. The desktop app has a fluid user interface, and when we move to mobile, the UI feels familiar. Most of the features are present across the platforms. Here the quick-connect helps connect to the nearest server available.

Kill-switch is available on all platforms, but split-tunnel is exclusive to Windows and Android. There is an in-built AdBlocker for mobile, but it is disappointing, to say the least. 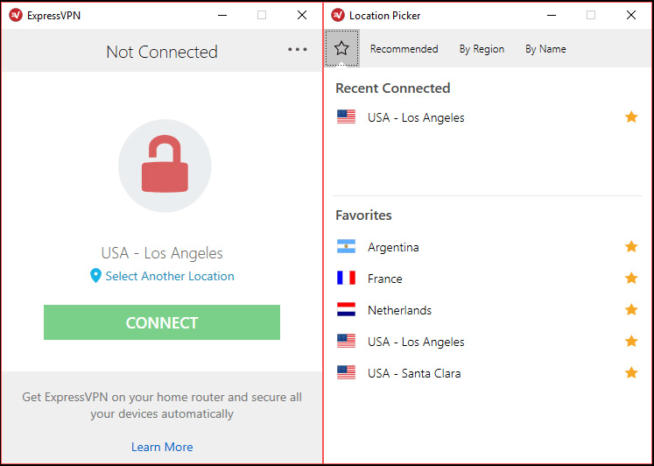 Taking on rigid censorship of China’s The Great Firewall, ExpessVPN has shown its mettle in VPN performance. Their no-logs policy, along with DNS leak-proofing, goes a long way. Similar to NordVPN, they have their VPN protocol, Lightwise. It is built from scratch to the ground up, ensuring optimal security by using WolfSSL. The other supported protocols are OpenVPN, SSTP, L2TP, and PPTP.

Moving onto the desktop app, there is a quick dashboard, accessible through the taskbar icon. You can pin your favorite apps, which upon clicking will launch through the VPN connection. The favorite VPN server can be pinned there as well. Similarly, the Android mobile houses virtually all the features unless you are on iOS.

Netflix’s content library offered in India doesn’t do justice to the price charged in the region. You can unlock over 28 libraries worldwide and make the most out of the subscription plan. On another note, the browser extension has been handed all the powers. No need to install the desktop client if you have it on. The extension can handle all the VPN requests and connections through the web browser itself. 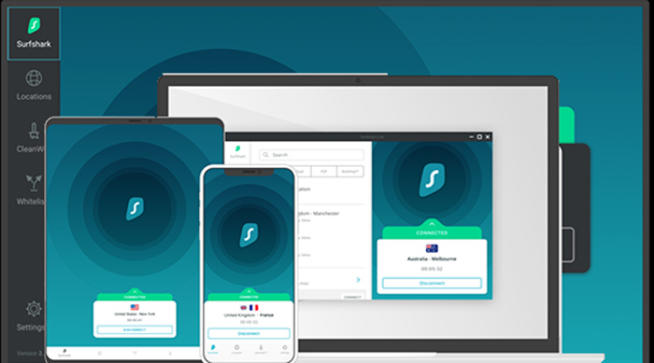 Offering a wide range of VPN protocols, they have all bases covered when it comes to bypassing censorship for Indian users. Surfshark has special measures in place for bypassing censorship of the highest levels. Its No-Border mode is automatically enabled when the network detects a regional restriction.

A total of four different VPN protocols are available – OpenVPN, WireGuard, IKEv2, and Shadowshocks. The latter is based on proxy-like open-source encryption for ensuring the highest security and anonymity in regions such as China, Iran, etc.

Don’t expect a lot from the desktop app, but it is enough to get by. Take advantage of the MultiHop connection for an extra layer of anonymity, which is also available on the browser extension. This multiple VPN feature is not available on mobile apps. 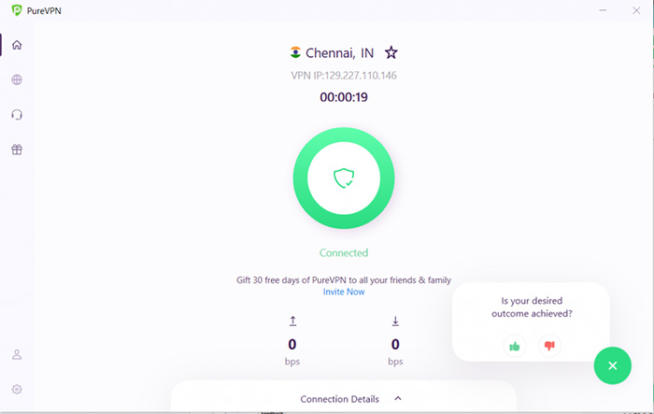 Among the few VPN services out there that offer five VPN protocols across all their platforms, the servers are spread across 140 countries around the world. There is no free trial here, or you have to put your money down for using it. For $0.99, a week-long trial is available for users.

Offering all the topmost protocols, it has – OpenVPN (TCP/UDP), L2TP, IPsec, IKEv2, SoftEther. The servers are caged using the AES-256 asymmetric encryption, leaving no room for security loopholes. Talking about performance, download all your torrents at impressive speeds using the P2P optimized servers while keeping the IPs and identity secure online.

The desktop app shines all till the end. It has everything placed systematically and linearly, making every function accessible right on the screen. There are different VPN modes, such as streaming, gaming, download, P2P, etc., for distinct usage patterns. You can even raise a support ticket without leaving the app. 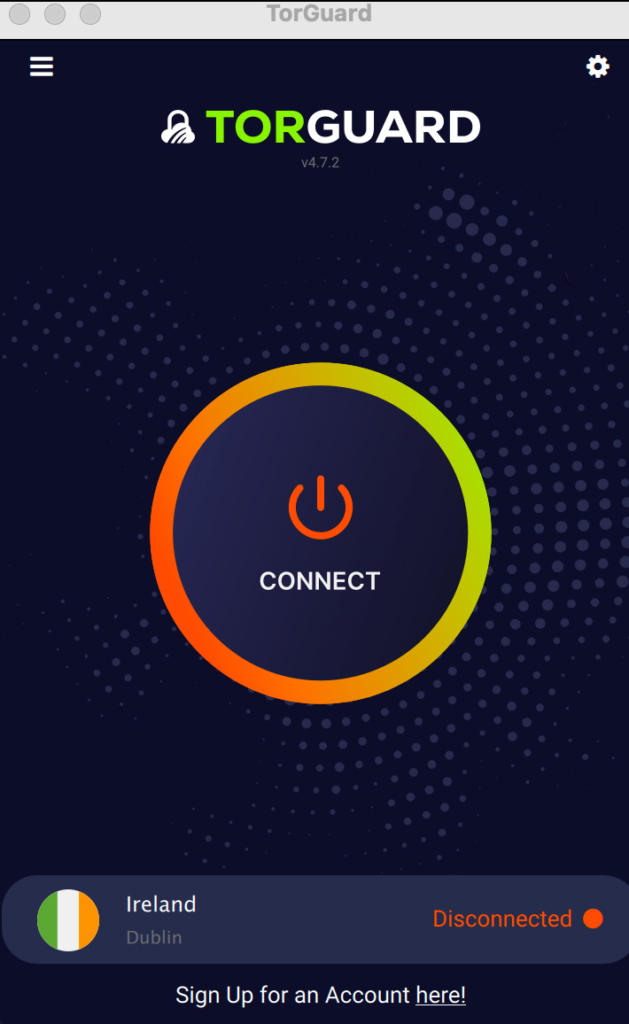 Several VPN services out there offer access to Netflix libraries and are optimized for OTTs. TorGuard, as the name might suggest, is built for torrenting, with all its servers optimized for P2P transmissions. India is amongst the largest torrent network consumers for downloading different games, files, and videos. The majority of the torrent sites are blocked in the country on special legal requests. With the help of TorGuard, all the restrictions on accessing torrent search engines, apps, and sites can be removed without breaking a sweat.

Take advantage of the Bypass DPI for improving the overall performance of the connection without any special configuration. There are no restrictions on the bandwidth and speed while connections are pegged at eight. Delving into the VPN protocols at hand, we have five different ones – OpenVPN, WireGuard, IKEv2, L2TP, and IPsec.

You can also calibrate the level of encryption for adjusting overall download performance. The TorGuard desktop app is available for all platforms. Its user interface feels regular and honestly could use a refresh. On the contrary, the mobile app feels more polished and utilizes the features to its full potential. 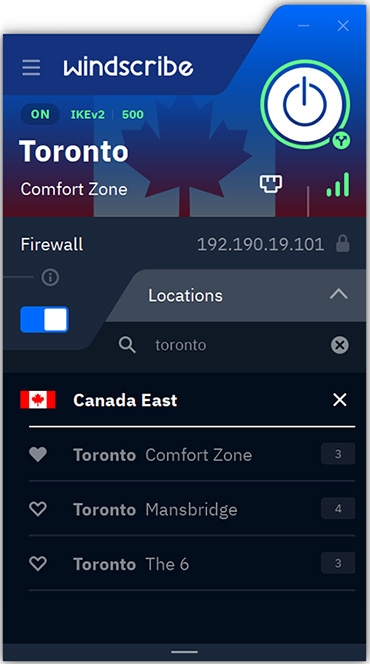 VPNs can be an expensive affair when you’re a student or trying to cut back on the monthly budget. Windscribe doesn’t hold up in providing free VPN service by offering a 2 GB monthly bandwidth. It can further be increased to 10 GB by verifying your email.

Winsdscribe offers the most secure VPN protocols – IKEv2, WireGuard, OpenVPN(TCP/UDP), Stealth, and Websocket Stealth. Before covering the desktop client, their mobile app deserves all the spotlight. Layered with 2FA on login, you get a next-generation user interface that combines usability and accessibility.

Like mobile, the desktop app feels at home, offering compact and fast operations with well-placed buttons. You cannot minimize the app window as it will exit the process and the application. The taskbar icon consists of the older styled right-click menu with locations, connect, and a preferences button. Advanced action parameters can be set up here apart from an optional IPv6, which is enabled by default. 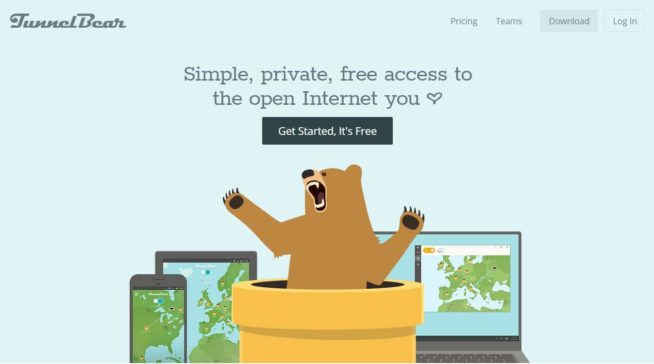 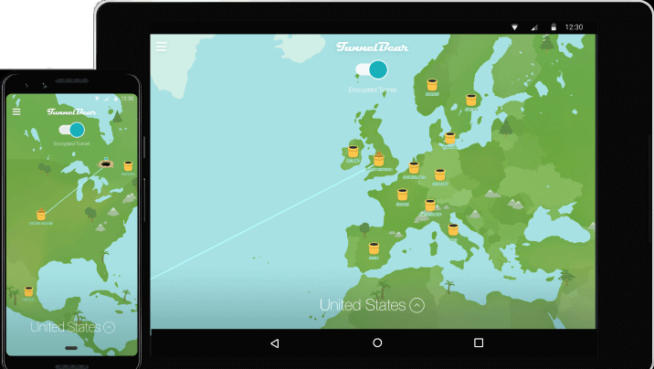 The second free VPN for use in India is TunnelBear, which honestly doesn’t need an introduction. As a freemium service, it offers 500 MB monthly bandwidth with a one-time bonus of 1 GB by posting a tweet about the service.

TunnelBear’s VPN protocol list is relatively short. OpenVPN is available for Windows, Android, and macOS. On the other hand, iOS relies on IPsec for the same. Unlike other free VPNs, there are no restrictions for server location access or any of the available features on the service. Swerving to security, TunnelBear uses AES-256 for data encryption, and SHA256 for data authentication, along with 2048-, 3072-, or 4096- bit Diffie-Hellman group for handshake encryption.

Their desktop provides a refreshing touch to the rather mundane line of VPN clients offered by others. Decked out in different colors, laced with animated characters performing subtle actions on each action. You have a giant world-map with server locations pinned. Both Android and iOS provided a toned-down version of what is offered for computers, with the map remaining the focal point.

3.1 How to choose the best VPN for India?

Choose the best VPN for use in India by first looking at server locations in India itself. Check whether connecting to the locally located servers helps unblock sites and apps or cannot do so. For instance, few Indian servers offered by a certain VPN service have a Mumbai server but fail to unblock blocked subreddits on Reddit. And when you want to access OTT libraries of countries, look for servers in particular regions.

Secondly, look out for servers in the neighboring countries, such as Nepal, Bangladesh, Sri Lanka, and Bhutan. Fundamentally, the proximity to the server will play a role in the speeds you get on the VPN. Connect to the servers’ houses in the neighboring countries and observe the speeds you experience on them. Our correspondent from India, sitting in the northern part of the country, had the best speeds from Bangladesh and Sri Lanka servers.

3.2 Which ISP block sites in India?

All the ISPs and Sim carriers with mobile Internet facilities must adhere to the TRAI circulars, instructing on blocking webpages, apps, and other related Internet-based services.

As of now, there are no regulations in India concerning the usage of VPNs.
Recently, the country’s Parliamentary Standing Committee on Home Affairs has recommended banning VPNs, citing “such services enable criminals to remain anonymous.” The Internet Freedom Foundation, a volunteer-based foundation in India fighting for net neutrality, is on the front to ensure that it doesn’t happen.

In a nutshell, viewing anything prohibited by law can land in your trouble with the authorities. Using VPN, in general, will not land you in trouble until a law is passed.

Although India doesn’t have stringent censorship laws in place yet, there are a few reasons why you should use VPN in India:

3.5 Which VPN offers the most Indian-based servers?

Use a server located in another part of your country is ideal for occasions such as private browsing and accessing websites that are specially blocked by your ISP alone. Windscribe offers the most with 3 locations, followed by Surshark, offering 2 locations in India and 1 virtual location routed through the UK. Rest offer 1 location in the country, primarily located in the city of Mumbai.

3.6 Can I watch Hotstar from outside India?

Hotstar is a part of Disney+, available in India with localized content along with the Disney library. You can’t access it if you are not based in India. Use an Indian server on a VPN to access Hotstar from outside India.

Jio is infamous for blocking VPNs and proxies across their network. They do that by blocking GRE ports, primarily focusing on the ones used by PTPP since the company’s launch. You can use ExpressVPN, NordVPN, and Surfshark, which run successfully on the Jio network, both wired and cellular.

The completely free VPN services often rely on user data which they sell to advertisers and other revenue sources. Instead of using them, you can try services such as Windscribe and TunnelBear, which offer a particular amount of free bandwidth every month. Post that, you can subscribe to continue using the service. This helps such VPN services offer free plans while being sustainable without relying on unethical tactics to earn revenue.

Keep this list handy when selecting a VPN for use in India.