No matter how long you’ve been using that “webmaster” tag on your shirt, you’ve undoubtedly come across both HostGator and GoDaddy – the two giant web hosting providers that are dominating the hosting world, and for good reason.

Although they’re pretty similar in terms of features (they even operate under the same group, which is EIG), both HostGator and GoDaddy offer some unique options that make them stand from one another. And that’s what we’re here to discuss.

So, without further ado, let’s get to the HostGator vs. GoDaddy comparison!

Both HostGator and GoDaddy are pretty easy to use. Once you purchase a hosting plan, setting up a website becomes a piece of cake, especially that both providers offer one-click WordPress installation.

To manage your sites and emails on either GoDaddy or HostGator, you can use cPanel, which is the most used control panel available today. cPanel is offered free of charge by both hosting providers, which is why we’re calling it a tie between the two.

The interface is pretty important for the user experience to be perfect, but let’s cut to the chase and address the big elephant in the room: which hosting provider is better in terms of speed and performance?

To compare the speed and performance of HostGator and GoDaddy, we got the cheapest plan from each provider, installed WordPress along with a basic theme on each hosting account, and ran some benchmarks that test how fast the site loads and how well it performs under load.

So, how did they perform?

Well, they did good, but we weren’t really impressed (since we’ve tested a plethora of faster services before). GoDaddy beat HostGator when it comes to caching and system resource management, whereas HostGator showed a better response time of around half a second (which is pretty impressive for a shared hosting package). For reference, we found that the average response time for sites hosted on one of GoDaddy’s plans is 1.2s, though that number increases as the number of concurrent visitors raises.

Features are yet another essential factor to consider when looking for the best hosting provider for your websites. Keep in mind that many features are nothing more than cash-grabs, which is why you need to look at the usefulness of different functions rather than their number.

GoDaddy has a nice website builder that you can use to design your sites. Such functionality can be pretty useful if you’re new to the world of webmasters. Unfortunately, GoDaddy’s website builder is not the best around, but it’s not bad either. Besides, it comes with several beautifully-designed templates, which should take some work off your plate. Unfortunately, it’s not available for the shared hosting plans.

Worry not, though, as GoDaddy offers pretty feature-packed WordPress hosting plans, which come with everything their shared hosting plans lack. With WordPress, you can easily install themes and make stunning websites in hours, so you don’t really need a website builder. Keep in mind that GoDaddy’s WordPress hosting is pretty expensive, which can seem like a downside for many webmasters, especially those on budget.

What’s inconvenient about GoDaddy is that most add-ons are paid, which means that you’ll have to spend some cash if you want the best hosting experience. For instance, backups cost 3 bucks per month, whereas malware scanning costs 7 dollars per month and SSL certificates cost 7 bucks each.

Just like GoDaddy, HostGator does offer plenty of neat features, but many of them are paid, such as LiteSpeed servers, solid-state storage, and caching. As always, getting managed WordPress hosting does solve most of the problems that come with shared hosting, especially that it comes with handy features like CodeGuard daily backups and SiteLock website security. 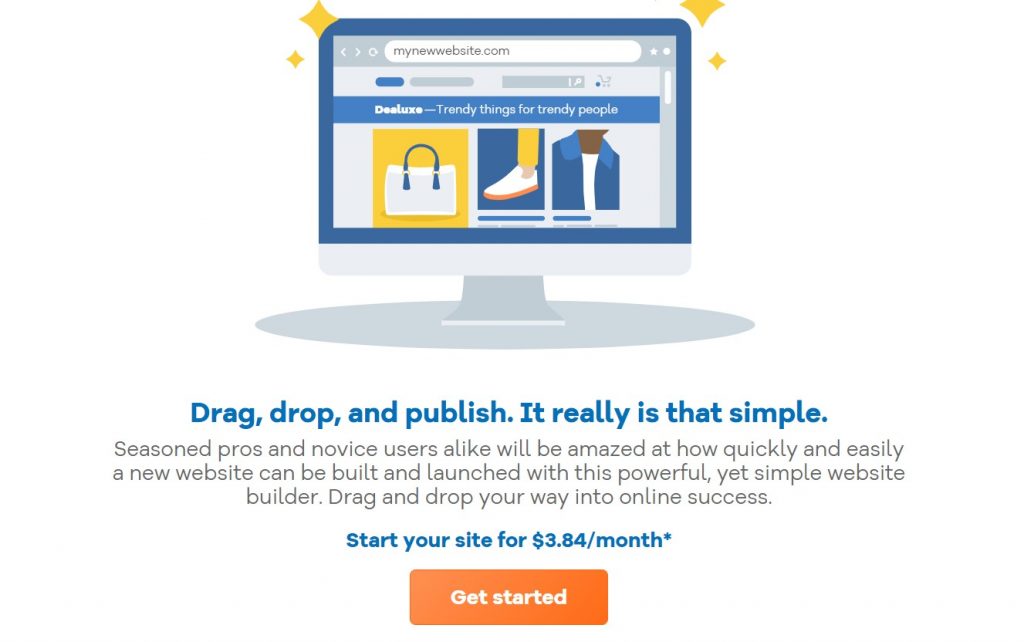 As you can see, HostGator and GoDaddy aren’t that impressive in terms of features, but the fact that HostGator offers a couple of free website builders while GoDaddy doesn’t makes this hosting provider the winner in this category (between the two, that is).

Once you start receiving a steady flow of daily visitors to your website, downtime becomes a nightmare. Thankfully, both HostGator and GoDaddy have several measures in place to prevent such an inconvenience.

That said, although HostGator promises a 99.9% uptime with a guaranteed compensation package (you can have a credit applied to your following month of hosting), GoDaddy only talks about their uptime of 99.9% with no mention of compensation in case they fail to honor that commitment. That’s why we’re giving the lead to HostGator in this department.

Keeping a site secure is no small feat (unless you have an all-knowing tech guru in your team). Hacking attempts, natural disaster, and power failures are real and scary. That’s why you must pick a hosting provider that have several security measures and efficient backup protocols in place (as a last resort in case something goes south).

How Well Does GoDaddy Perform in Terms of Security?

Team GoDaddy does perform well in this department. Knowing that this is one of the major hosting providers today, it’s easy to see why it’s a big target for hackers. The company claims that its systems stop around 2.5 million brute force attacks every single hour. Thankfully, GoDaddy does have the means to keep its users’ websites safe. Every hosting plan comes with SHA-2 and 2048-bit encryption, which is as far as they get in terms of security.

Not only does GoDaddy protect data virtually, as their physical infrastructure is also a force to reckon with. Not only does the company’s servers have an uninterrupted power supply, but they also have several cooling systems to keep them, as well as other components, at the right temperature all the time. They’re also pretty safe from intruders thanks to 24/7 monitoring by real people.

Should you go with GoDaddy, you’ll also get daily cloud backups as well as malware scans for a small monthly fee. Now, free is always welcome, but the money you spend on protecting your site is money well spent, especially if you’re serious about your online business.

Is HostGator on Par with GoDaddy?

Well, yes, and no. HostGator does have secure data centers with state-of-the-art technology to keep all its users’ websites safe and sound, but it isn’t as good as GoDaddy when it comes to backups.

HostGator’s data centers are monitored 24/7/365 by real people to keep them well protected against intruders. Entrances are protected by biometric locks, which adds an extra layer of security. Just like GoDaddy, HostGator’s servers also have uninterrupted power supply as well as advanced cooling systems to keep them at an ideal temperature.

Unfortunately, HostGator doesn’t offer daily backups. Instead, backups and malware scans are done on a weekly basis. Furthermore, if you need to restore your site from a HostGator backup, you’ll have to pay for it.

Customer support is a critical factor to consider when looking for a new hosting provider, especially if you’re a newbie in this field (we’ve all spent countless hours with support when first starting out, don’t worry).

Both HostGator and GoDaddy excel when it comes to customer support. Both providers have a ticketing system in place, and their support teams can be reached via live chat, phone, and email. When we tried contacting each of them via different support channels, we were satisfied with the help we got.

GoDaddy and HostGator also offer extensive knowledge bases that contain a plethora of guides and tutorials. That way, you don’t need to spend time waiting for a support agent if you just need to solve a couple of simple issues.

Each of those plans comes with free website migration as well as cPanel, 24/7/365 support, and one-click installs. Additionally, those plans come with a 45-day money-back guarantee. 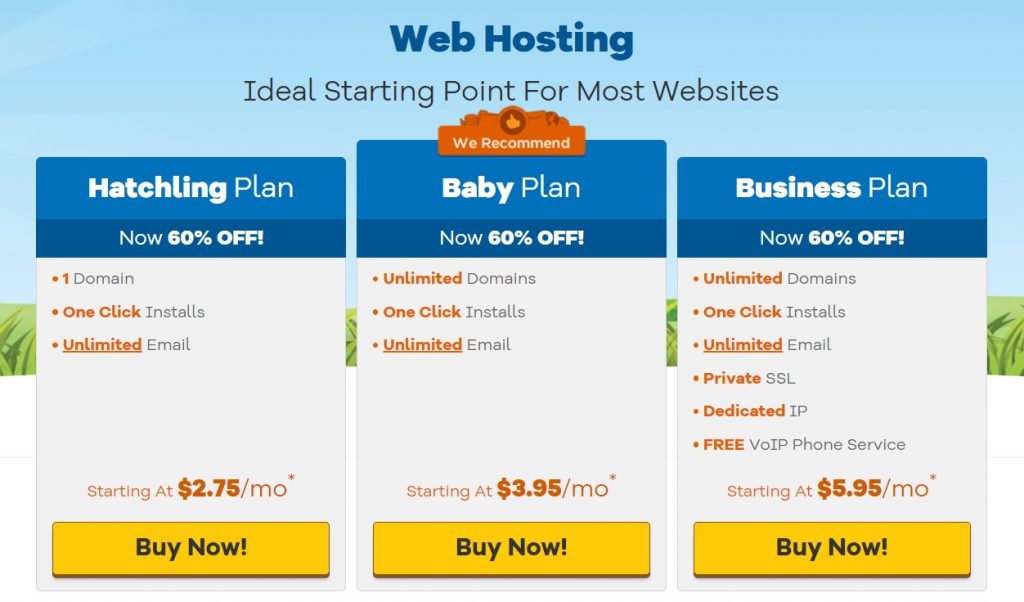 GoDaddy, on the other hand, offers four shared hosting plans: 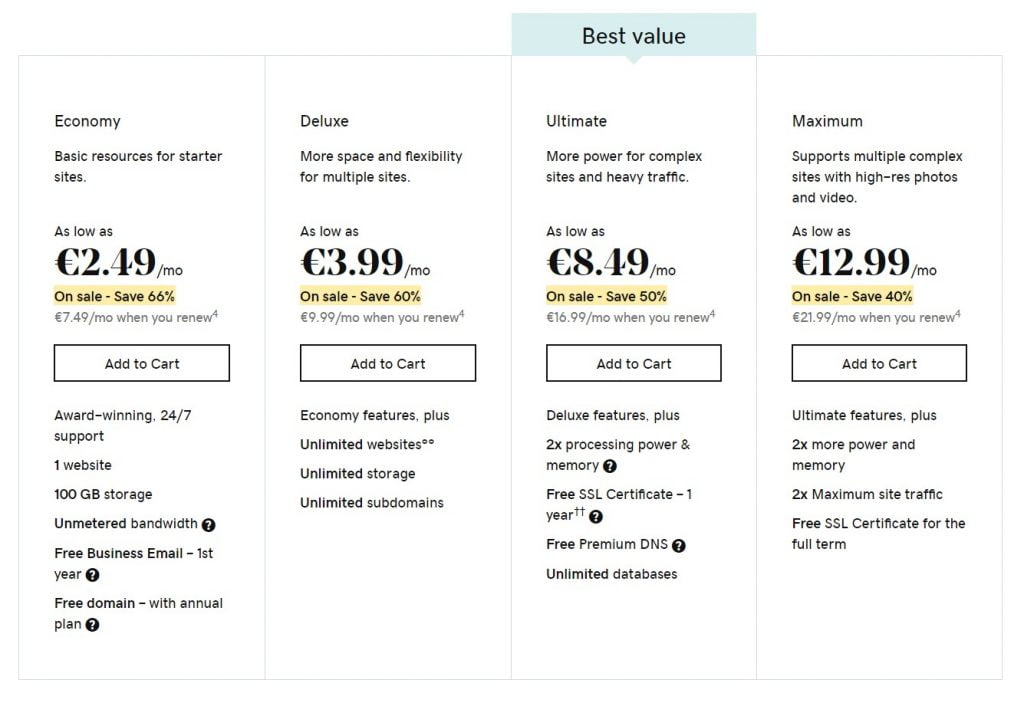 You need to keep in mind that the aforementioned prices are for the first term and that the renewal price can be a bit higher.

As you can see, HostGator hosting plans are cheaper than those of GoDaddy, and they do come with several extra perks. If you’re looking for the bang for your buck, go with HostGator.

Although GoDaddy and HostGator are pretty similar in what they offer, they do provide some extra features that make them stand out from one another. For instance, while HostGator offers more affordable plans, GoDaddy has the upper hand when it comes to security.

Don’t worry, although HostGator and GoDaddy ate awfully similar for being competitors, we’re not going to leave you hanging. We do have a winner today, which is HostGator.

HostGator is more affordable, and their shared hosting plans include two website builders, which can be a huge plus for beginners. Besides, their support team is quite helpful, and they do perform well in terms of speed. All of that makes HostGator worthy of the winning title of the HostGator vs GoDaddy debate. 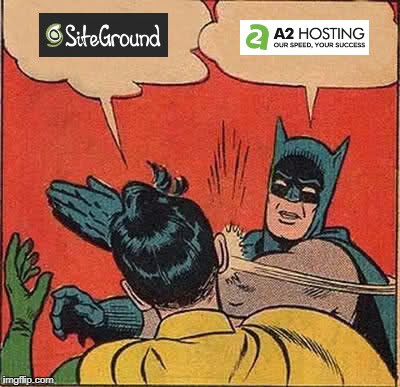 View all posts by Marcus Eriksson →